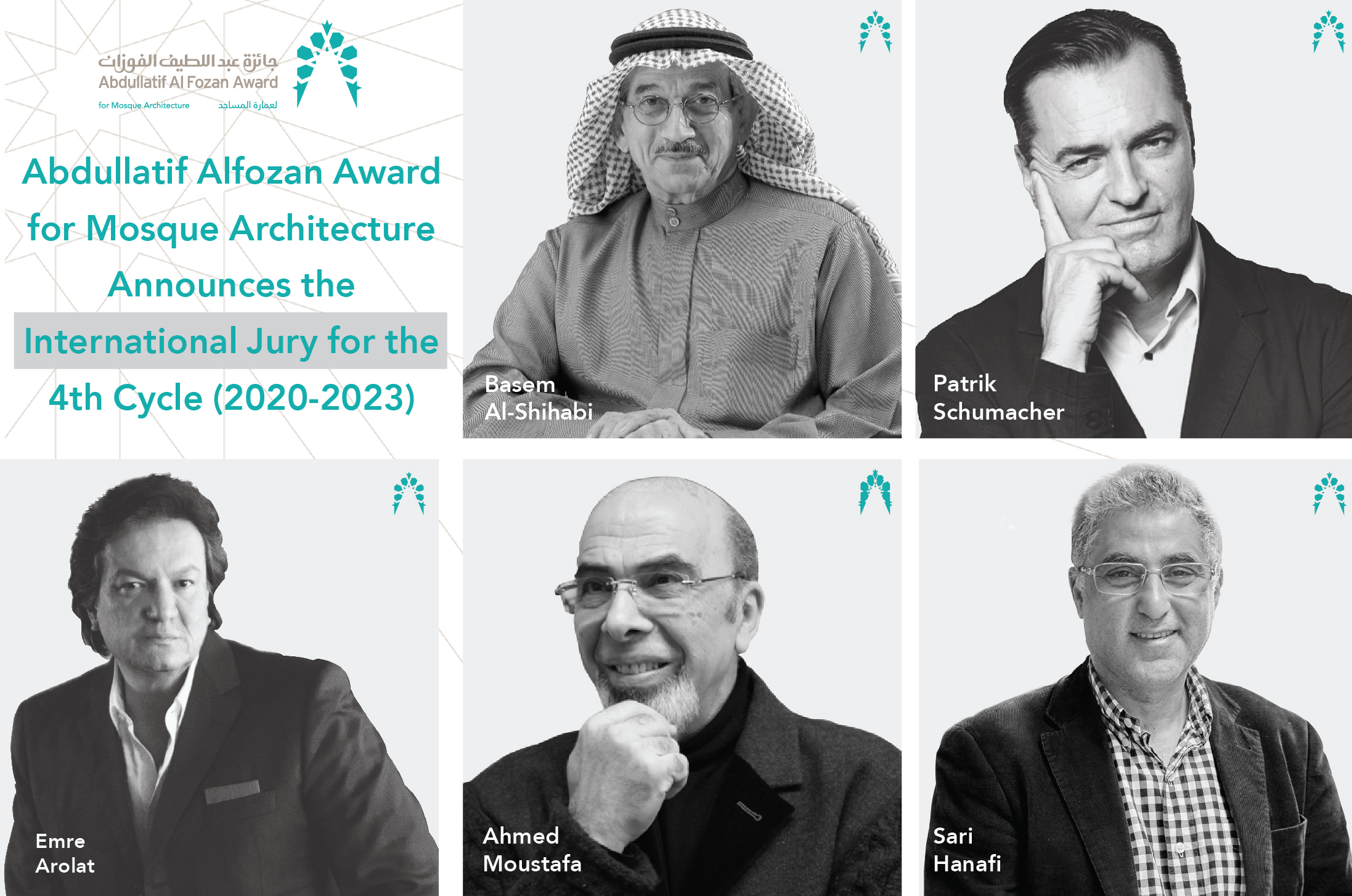 The Abdullatif Alfozan Award for Mosque Architecture has announced the names of the members of the international master jury for the fourth cycle of the award (2020-2023), the jury consists of five members (three architects, one specialist in Islamic arts, and one specialist in social sciences). Committee members have various professional, academic and technical experiences that will enhance work of the award and will ensure professional assessment for those projects nominated for the prizes of the 4th cycle with full transparency. It should be noted that the fourth cycle of the award covers for the first-time mosques nominated from all over the world.

The jury consists of the following members:

Responsible for the overall management of the company, he has overseen its development from a small architectural practice into one of the leading multi-disciplinary consulting firms in the Gulf.
The firm worked on the design for Kingdom Tower in Riyadh, which was completed in 2002 and still stands as the kingdom’s tallest building. Currently the firm is involved in a number of key Saudi projects, including Kingdom Holding’s Kingdom Tower in Jeddah.

It is also involved in the design of the Capital Market Authority tower in the King Abdullah Financial District.

2- Patrick Schumacher
British architect and architectural theorist based in London. He is the principal architect of Zaha Hadid Architects. Schumacher started a teaching career in 1993, teaching a post-graduate diploma course in architecture, then from 1994 to 1996 Schumacher was assistant professor at Berlin, Germany. In 1996 he founded (with Brett Steele) the Design Research Laboratory (AADRL) at the Architectural Association School of Architecture in London.

Since its incorporation in the late 1990s, Schumacher served as a director of Zaha Hadid Architects (ZHA) and is credited as partner and co-author of the practice’s output. Since Hadid’s death in April 2016, he has been leading the firm as its sole remaining partner.

3- Emre Arolat
Emre Arolat is an architect and design partner of EAA-Emre Arolat Architecture, founded with Gonca Paşolar. Engaged in a wide range of projects, from urban master plans and airports, to residential and cultural buildings, and workplaces, EAA became an internationally recognized practice with offices in New York, London and Istanbul.

Emre Arolat teaches and lectures widely. He was the co-curator of the first Istanbul Design Biennale in 2012. He was awarded a professorship by the International Academy of Architecture, Sofia.
EAA’s work has been published into several books by prominent international publishers including Rizzoli New York and Oro Editions. They also have been shown in exhibitions at renowned institutions including the Design Museum, The Royal Academy of Arts and the Royal Institute of British Architects (RIBA) in London, and were presented at the International Architecture Biennale in Venice in 2012 and 2016.

4- Ahmad Moustafa
Ahmed Moustafa is an Egyptian British artist and scholar of international repute and a leading authority on Arabic art and design. Initially trained as a figurative artist in the neoclassical European tradition, and drawing his inspiration primarily from Renaissance masters, he subsequently rediscovered his Islamic roots, and his work is now almost exclusively devoted to abstract compositions inspired by texts from the Holy Qur’an. He has created an astonishingly rich visual vocabulary through an innovative fusion of his skills as a painter and as a master scribe in the tradition of Islamic penmanship.

Dr. Moustafa has lived and worked in London since 1974 and directs the Fe-Noon Ahmed Moustafa Research Centre for Arab Art and Design, which he established in 1983. He has taught and lectured in many parts of the world, and is currently a visiting professor at the Prince of Wales’s Institute of Architecture, London, the University of Westminster, London, and the Faculty of Fine Arts, University of Alexandria, Egypt. He was recently been appointed to a Fellowship in Islamic Art at the Oxford Centre for Islamic Studies

5- Sari Hanfai
Sari Hanafi is currently a Palestinian French Professor of Sociology, A/Director of Center for Arab and Middle Eastern Studies and Chair of the Islamic Studies program at the American University of Beirut. He is the President of the International Sociological Association. Recently he created the “Portal for Social impact of scientific research in/on the Arab World” (Athar). He was the Vice President of the board of the Arab Council of Social Science. He is as well editor of Idafat: the Arab Journal of Sociology (Arabic) Among his recent books are: The Oxford Handbook of the Sociology of the Middle East, Knowledge Production in the Arab World: The Impossible Promise. (with R. Arvanitis). He is the winner of 2014 Abdelhamid Shouman Award and 2015 Kuwait Award for social science. In 2019, he was awarded an Honorary Doctorate (Doctor Honoris Causa) of the National University of San Marcos (the first and the leading university in Lima- Peru – established in 1551).