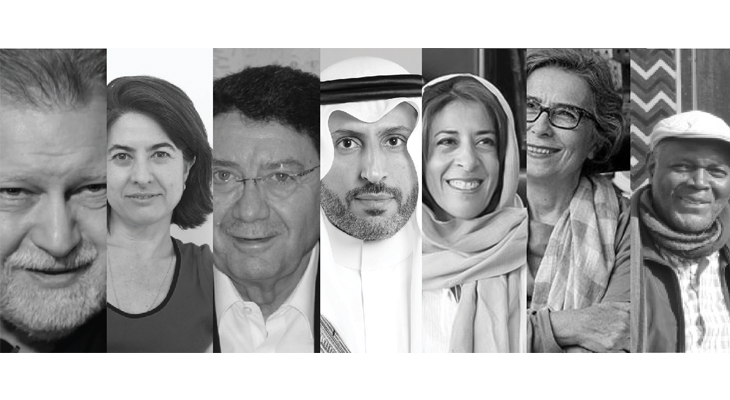 Abdullatif Al Fozan Award for Mosque Architecture, announces the methodology, names and qualifications of the members of the International Master Jury for the third cycle of AFAMA in a multi-media press publication.

The CEO of the Award Abdullah Al Fozan has outlined the objectives of the Award in consideration of Mosque Architecture development. Besides, he has provided the architectural and technical informational requisites that could help those working on Mosque Architecture worldwide, to come up with artistic, effective and sustainable architectural solutions. Al Fozan has stated that AFAMA has expanded its work during the third cycle, to cover all Muslim majority countries in four continents. He said that this geographical expansion was followed by scientific discoveries and systematic expansions. The Executive Committee of the Award has settled upon a seven-membered International Master Jury. Four of which are international architects, a visual arts expert, a social sciences and humanities specialist and finally a historian. He said that the selection criteria of the jury architect members stipulate that each candidate member should be public buildings architectural design experienced, and knowledgeable about Islamic culture, arts and literature. The latter condition is to be required from all candidate members.

Al Fozan has indicated that the geographical, ethnic and cultural diversity has been considered, to ensure transparency and credibility of the Award. He has also added that the third cycle witnesses an important coursework methodological development, thanks the Award partnership with the International Union of Architects (UIA). This insures the authenticity of the architectural content of the Award. He said that the Presidency of the UIA has participated in the membership selection of the International Master Jury of the Award for the third cycle, where UIA will host the first meeting of the International Master Jury at its headquarters in Paris during the second half of January 2019.

He said that the expected number of nominated mosques by the end of the nomination process in January 2019 will be 200 mosques allocated in more than forty countries within the four continents. The nomination process of mosques has gone through inspection of local nominators from each region, and sometimes each country. He said that the technical staff of in the Award’s General Secretariat are working on the classification, documentation and authentication of mosques. Additionally, staff members are contacting with the architects of these mosques in different countries. He said that the team of the AFAMA has the adequate experience in analyzing the architectural designs of the mosques and their classification according to architectural styles or functions. Moreover, the relation of the mosque architectural validity within its urban fabric is considered. He has noted that the objective of the first meeting of the International Master Jury in Paris January is to cut the list of the nominated mosques short, after deciding upon the best architectural designs. The CEO of the Award has pointed out that the Secretariat does not intervene and will not interfere with the decisions nor recommendations of the members of the jury, confirming that the work of the AFAMA Secretariat and UIA team will be confined to administrative and logistical matters. Therefore, regarding the membership of the International Master Jury, Al Fozan said that the Executive Committee of the Abdullatif Al Fozan Award for Mosque Architecture has chosen the members of the Committee after a long and complex assessment process. The members of the Executive Committee hence agreed to select the following members:

Efim Rezvan, Anthropologist (PHD)
Professor of Islamic Anthropology, specialized in Quranic studies and has many works on the miracle of the Holy Quran.

Elisa Valero, Architect (PHD)
Owner of the consulting firm “Valero” and famous for her designs of the Religous Buildings. she is representing the UIA in the International Master Jury.