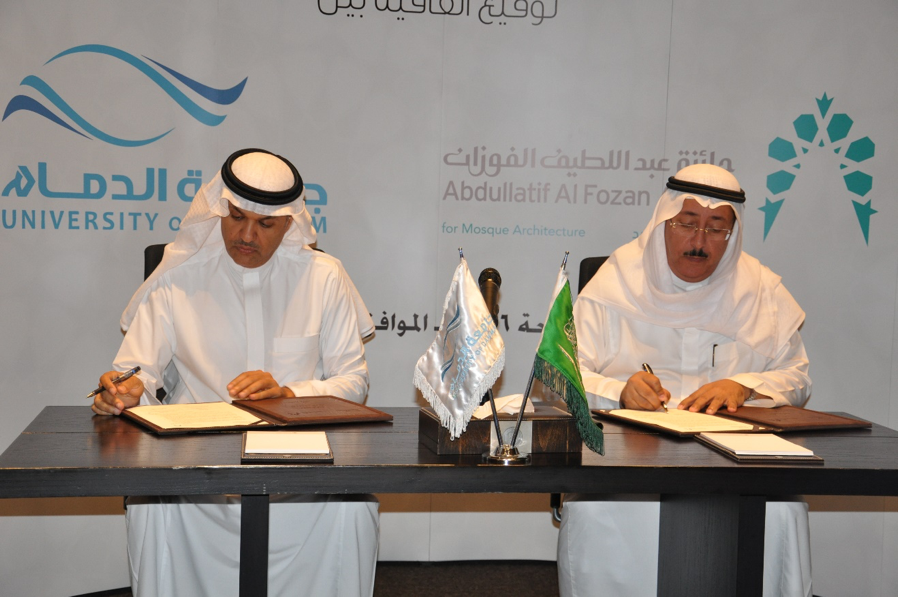 Abdullatif Al Fozan Award for Mosque Architecture Contracts Agreement with College of Architecture and Planning in University of Dammam.

Abdullatif Al Fozan Award for Mosque Architecture has contracted an agreement with College of Architecture and Planning in University of Dammam. The agreement stipulates that the Award shall make advantage of the experiences and aptitude of the university researchers, academic staff members and specialists, securing cognitive, architectural and consultancy services of the university, for the Award to achieve its objectives and realize its longed for aspirations. Besides, the administration of the university shall be assigned to organize workshops and training courses, to qualify their cadres; architects, technicians and students, to generate able Mosque Architecture Development competencies in architectural and environmental respects.

The agreement has been signed in Al Fozan Association headquarters in Khobar by both terminals represented in the founder of the Award; Sheikh Abdullatif bin Ahmed Al-Fozan, and His Excellency Dr. Abdullah bin Mohammed Al Rubaish; the Dean of university of Dammam. Moreover, the contracted agreement has been attended by a member of the Executive Committee of the Award; Abdullah Hussein Alkadi; the Vice Dean of Community Service and Sustainable Development, Prof. Abdulsalam Ali Al-Sudairi; Dean of college of Architecture and Planning, University of Dammam, Dr. Saeed Al-Awais; the Dean of the College of Design, Dr. Ali Al-Sulaibi and Dr. Jamal Al-Din Slaghour.

On his behalf, Mr. Abdullah Al Fozan has expressed his contentment towards the signed agreement with the University of Dammam; stating that the agreement conforms to the scheme of the Abdullatif Al Fozan Award for Mosque Architecture in terms of its pursuit of illustrious research, nonpareil designs and effective ecological solutions. He has added that partnerships with academic institutions paves the way, to witness the objectives of the Award. The Award is innovated to develop the conception of Mosque Architecture, and encourage engineers and architects to come up with epitome architectural designs.

Al Fozan has continued that the University of Dammam is one of the most high ranking academic institutions in Kingdom of Saudi Arabia and worldwide, for its vast enclosure of qualified and specialized experiences. Furthermore, it homes a number of scholarly academic staff members. Therefore, it has been decided to contract the agreement.

On the other side, His Excellency Dr. Abdullah bin Mohammed Al Rubaish has praised the Award for its revolutionary success in the development of Mosque Architecture in the kingdom during its first round. He has also assured that contracting this agreement has been out the devotion of the university to take part in the community services. Henceforward, the Award has been its portal to fulfill this mission, for nothing is better than serving the development of Mosque Architecture.

In that event, Dr. Ibrahim Mubarak Al-Naimi; the Secretary General of the Award has expected an utmost advantage from the bilateral corporation. He said that agreement abides by the policy of the Award. It could form a cluster of specialized partnerships and agreements with civic organizations, reaching the goals of the Award, and meeting the expectations of its officials. He has held pride in the Pan-Arab sweeping success of the first round of the Award. Thusly, he declared that the Award has started its early preparations, to validate that honorable success, to include the mosques of the Arab Gulf countries, having been limited to the mosques of Saudi Arabia in the first round.

The Award is held every three years, aiming at the amelioration of Mosque Architecture, and the motivation of architects and engineers to spread mosque design renovation. It aims at raising the awareness of the architectural, artistic and functional aspects of mosques in an interactive framework with the surrounding environment and the current adjustments to the second prize. The Award is widening its geographical encompassment, to include the mosques of the Gulf region. The prize also has identified four categories of mosques to get nominated: a central mosque, a major mosque, a local mosque and a restored mosque.