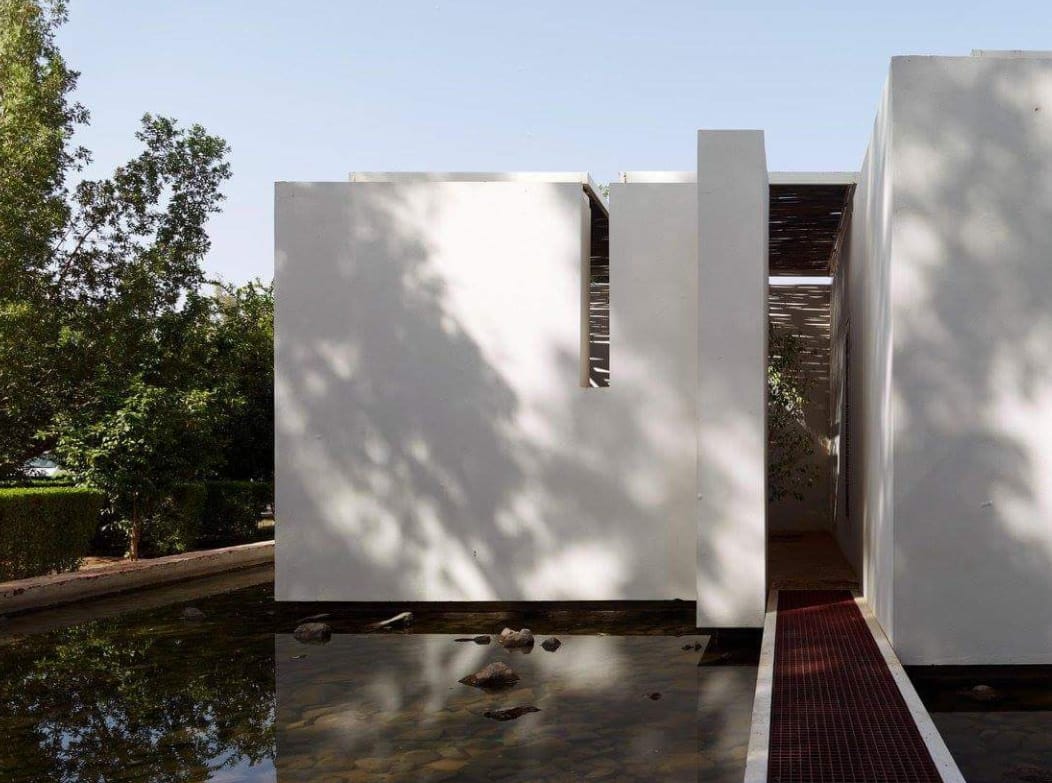 The perception of Mosque Architecture has been jailed among the walls of illusive traditionalism, even after the decease of most of the traditional construction techniques. Lamentably, the common-sense perception of that constant symbolic visualization and functional speculation of mosques all over the Muslim community has been confused with its visual realization, which is liable to consistent variation. This historically developed perception has earned undeserved sanctity creating a state of discouragement, sacrificing any novice modernization scheme. Moreover, the traditional historic picturesque of mosques has been clinched, to bestow a sense of submissiveness and serenity. Thus, the perception of Mosque Architecture has been confined to its adherence to its conventional historic designs.

Therefore, a revolutionary epistemological prospective is delineated, to address the origin of Mosque Architecture; 1440 years ago. This model had been void of architectural or material frame of reference, but temporal and spatial limitations essential for performing the Muslim prayers. However, the architectural aspect had been determined by the techniques at hand; as well as; the episodes of events right in Medina. Hereto, an envisioned theoretical hypothesis entitled “Parallel Heritage” has come up, to sort out the ongoing dilemma. This hypothesis is not designated to defy the heritage of Mosque Architecture, but to define its futuristic identity. The term may be controversially ambiguous with the conception of “Heritage” or “Legacy”. Yet, “Parallel Heritage” is a virtual train of thought, which is expected to survive to be a historic legacy in the future. Thence, this discussion investigates the futuristic manifestation of Mosque Architecture, in case it is unshackled from its premised roots, taking to a virtual modern adaptation contrary to its formerly conventional counterpart.

The concept of parallel architectural heritage is grounded on the circuition theory; the birth, evolution and decease of architectural formations throughout history. Besides, it focuses on the adjustments of these formations, and releasing substituent hybrid visualizations. It is an attempt to reach a compromise between a non-cloned historic architecture and displaying conformation to its stakes; reproduce distinct formations rather than the stagnant conventional ones. This hypothesis looks forward a futuristic heritage, abiding by the authentic historically rooted norms, conceptions and legalizations of the traditional historic formations.

Likewise, it aims at adjusting them in accordance with the au courant design scenario; the competency of the designer, and the necessity of the building in each context. It is the art of making advantage of one origin, to produce various realizations. The theory is to study the origins of these formations and the grounds of the birth and evolution of their realizations. The term “design scenario” is but a spontaneous performance carried out by those prolific designers who have the cognition to differentiate the origins of each formation, and the aptitude to master new ones. This process is called architectural productive creativity.

The underlying discrepancy within the historic architectural heritage is the precedence of certitude to exposition and experimentation. On the contrary, “Parallel Heritage” vows to prioritize the examination, experimentation and exposition processes, to attain firmly conditioned certitude. It is farther than antagonizing the former Mosque Architecture heritage, but a turnaround to the
rebirth of another. Furthermore, it is an expository prospective that does not comply with those piles of historically reverent formations, yet kneels down to the authentic sources, which determine the required ones. This has been an urging ideology nowadays.

In brief, this hypothesis is an expository study of the historical turnovers of Mosque Architecture heritage . Besides, it aims at generating a distinguished futuristic one. These attempts are grounded on the truancy of that technical, cognitive and artistry frame of reference, which has once produced these historical formations. Actually, the former frame of reference has been replaced by a recent substitution that requires the adaptation of modern conceptions and interplay among the entire summation of the involved terminals. That is to say “Parallel Heritage” is a binomial theory, where one of its factors is constant; the total sum of jurisprudent functional, temporal and spatial elements necessary for the legitimacy of prayers. Meanwhile the other is variable; the historically progressive technical, cognitive and artistry interactive factors with their constant counterparts. Henceforward, mosques would be real life incarnations of their historical eras. This interaction embodies the perception of the avant-garde Mosque Architecture, which would never infringe its originality and authenticity.