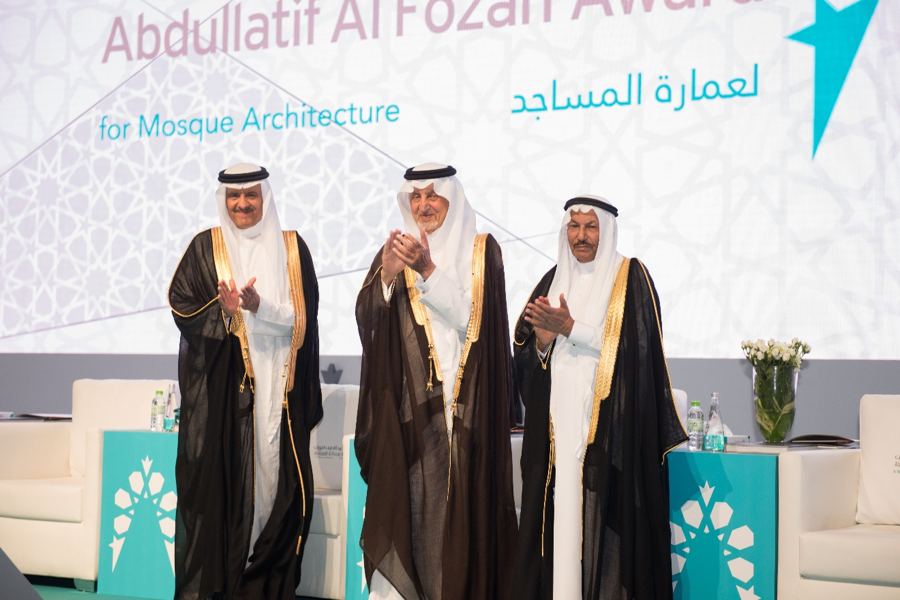 In its second round, Abdullatif Al Fozan Award for Mosque Architecture has finalized its winner’s ceremony. The ceremony has been held in Hilton Grand Plaza in Jeddah in 13th  Jumada II 1438 H/ 12thMarch AD. It has been sponsored by His Royal Highness Prince Khaled Al-Faisal; emir of Makah and advisor to Custodian of the Two Holy Mosques, and attended byHis Royal Highness Prince Sultan bin Salman bin Abdulaziz Al-Saud, ;the President and Chairman of the Board of the Saudi Commission for Tourism and National Heritage (SCTH) and theChairman of the Board of Trustees of the Award.  Shortly before the ceremony, PrinceSultan bin Salman has summoned a board meeting, to ratify the third round of the Award, and discuss its renovations.

The ceremonial program has included a delivered word by Prince Sultan bin Salman, followed by a display of a documentary movie narrating the winning nominees’ path in the realm of Mosque Architecture, identifying the grounds and criteria that have enabled them to win the award. On the behalf of the other winners, a word has been delivered by the head of the Arbitration Committee. Then, the three winning mosque projects have been announced, where the total sum of the projects amounted to thirteen mosque projects in the parameters of the Gulf Cooperation Council (GCC)

Eventually, the founder of  Abdullatif Al-Fozan Award, has expressed his gratitude and appreciation to His Royal Highness Prince Khalid Al-Faisal for his generosity to give his consent to the sponsorship and attendance of the ceremony in its  the second round, praising his devotion, to achieve the objectives of the Award; reviving the conception of utopian mosques.