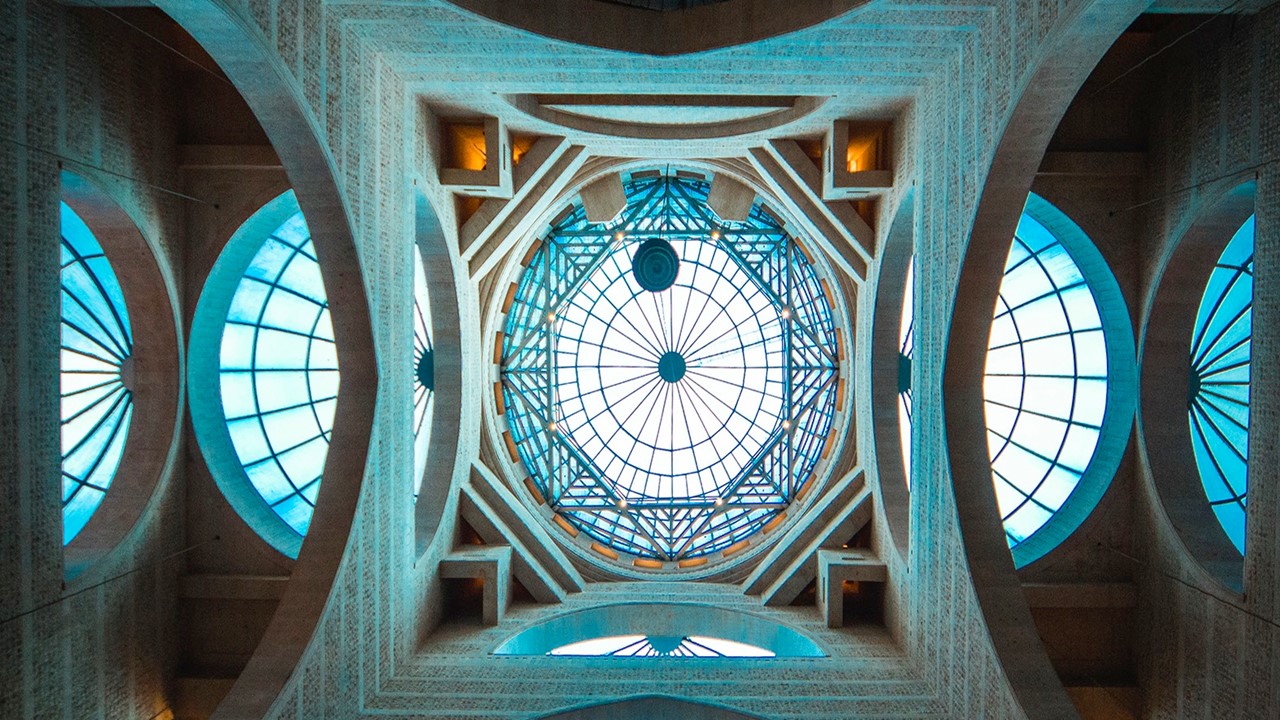 It is allocated opposite to the Metro railway station in Ezbet Al Nakhl district, Cairo. It is entitled as The Great Mosque. The mosque has been a charity work, where the beneficiaries of the district and their neighborhood started collecting donations since 2004, to get it funded, yet the quest is still on. The design work progress has lasted from 2009 till 2017.

The district is named after its prominent palm trees that had once coated its parameters till 1960. It is located on the outskirts of Cairo, for it had been appropriated for agricultural purposes in the end of the 19th century. However, the green district had been victimized by the random urbanization conquest, to be one of its most crowded slums in Cairo. Nonetheless, the project is planned to be realized within the most crowded spot among the noise-cursed slums, where it is despised for its population explosion, traffic congestion and lofty constructions. No mention, it is landmarked as Tuk-tuk , van stations; as well as the Metro Station. 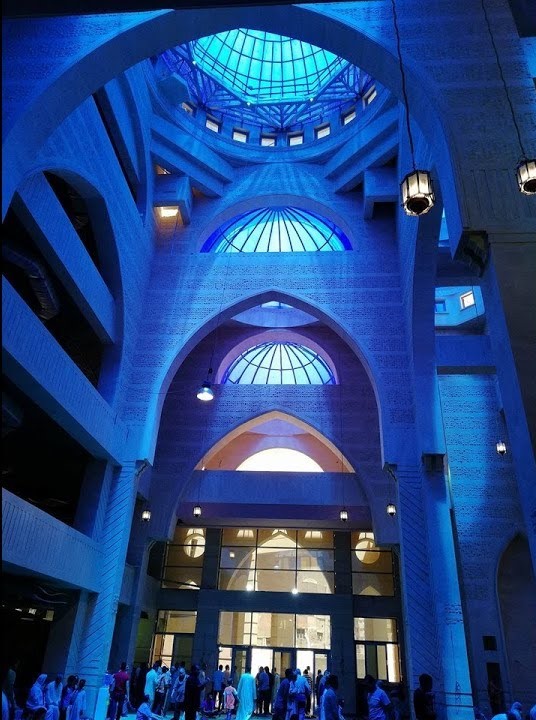 In 2003, the Egyptian Government informed the authorized parties of the Old Mosque, that its entire vastness; 200m2; lies within the urban planning zone, which entails its certain demolition. The named mosque has been a royal endowment. It has been founded by her highness princess Ne’mat; a granddaughter of Muhammad Ali Pasha. This devastation has motivated the beneficiaries of the former mosque, to think of an alternative. Therefore, in 2004, a bank account in an Islamic Bank has been activated for donations collection, to put their dream into action. Moreover, a charity association has been established, and named after the awaited mosque; The Great Mosque. It has taken the impoverished donators several years, to afford for a typical area land purchase. Yet, persistence is aptness, for they have managed, to enlarge its parameters by purchasing the neighboring lands. The total area of the mosque allotted land has reached 1500m2. Henceforth, the design process has been embarked in 2009.

The administration board of the association; in their consecutions since 2004; believed that out of epistemological prospects, the mosque appropriated lands must be under simultaneous horizontal extension. They ensured the feasibility of the purchase process of every neighboring land, when it is put for sale. Knowledgeable of land scarcity, the concerned board could foreshadow the thirst of the future land tenants for lofty constructions, that would hinder any probable extension attempt, even if financially affordable. This plan has been proved genuinely infallible, since the total area of the appropriated lands have mounted to 2700m2. The resilient coursework has not been stopped for fourteen successive years; ie shortly before its design phase till 2015. The board has been keen on safeguarding the adaptability of the mosque design to embrace any future extension, denoting that the recently vacant areas; must be void of any hindrances; staircases ,services, elevators, etc. Thus, the assigned architects must settle down these challenges. 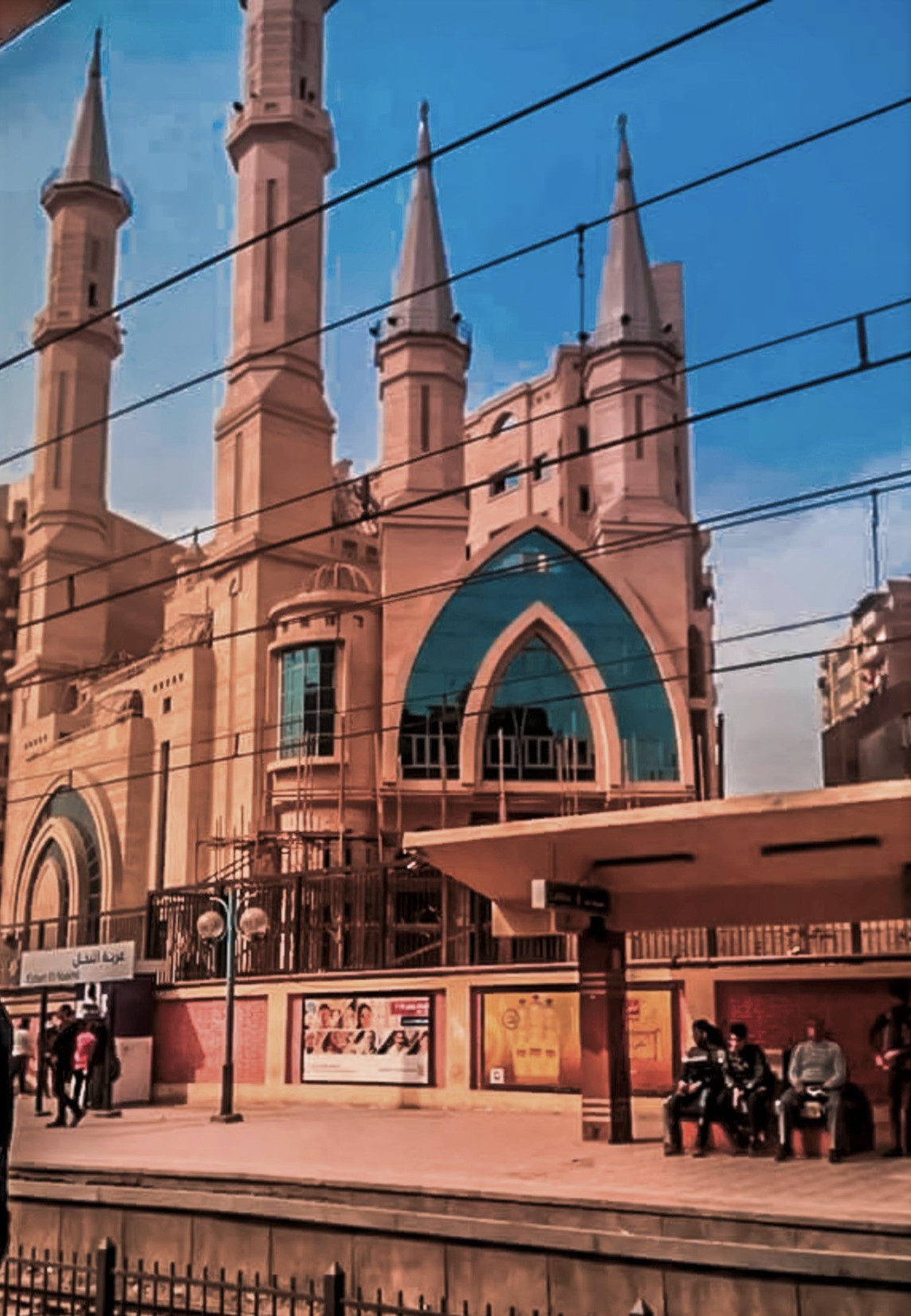 Five firm challenges are to face the entrusted designers, regarding the comprehensive methodological plan of the mosque.

First: The site compatibility must account for the land-lord determined mosque functionality. The mosque expected capacity shall accommodate around 4500 to 5000 prayers. In addition, it should enclose two occasion halls, which could be joined to be one grand hall. Besides, it is designed to home a medical center; dispensaries, scanning center, testing laboratory and all the perquisite services for these units. Here comes the challenge in consideration of the triadic relation between area, functionality and site allocation of the project.

Second: The conception of serenity for submission is hardly attainable in one of the most crowded and noise-polluted spots in Cairo.

Third: The asymmetrical land area requires an efficiently adaptable mosque plan, which could embrace any future extension; abiding by the horizontal extension prospect of the association. That is why the mosque should be perfectly functional horizontally and vertically. This requires a professional allocation of entries and services that could serve the recent plan and its liability to extension; as the land area of the project has been changed five times from 2009 till 2015.

Fourth: The nostalgic instinct to recall the bygone charm of Ezbet Al Nakhl; the once famed land for its cosines, beauty and palm greenness. There appears the comprehensive role of the architectural and urban bodies parallel to Spatio-temporal framework in relation to the civilizational and social conditions.
A comprehensive architectural plan is to trespass the abstract functionality of the building in isolation, to satisfy the users’ functional needs, actualize their aspirations ,touch upon their nostalgic affinities, and merge them in visually artistic picturesque. I have once heard my Ain Shams University Professor Muhammad Gabr stating that history has acknowledged architecture as philosophically divined, culturally derived, temporally incarnated, spatially implanted, man-maker though being manmade, soul inspired and eternally mutualized. In accordance with this perspective, it has been a demanding imperative, to go ahead memory mining that seeks adding rather than cloning. This what eternalize mosques in historical chronicles .

Fifth: The pure mental visualization of mosques among users and spectators on the short run must be granted. The mosque design should not be encompassed by stringing asymmetrical randomly constructed and repellently painted lofts. Worse, most of these buildings are of distorted facades. On the long run, it is a must stipulate, to look forward maintaining the stakes of the surrounding environmental design in terms of lighting, natural ventilation, acoustic and thermal insulation and maintenance mechanism for all the components of the building; both internally and externally. Together, the purity of this mental visualization (visual and environmental comfort) for the spectators of the mosque is achieved internally and externally.

Plot of the Design:

Amid facing the five aforementioned challenges, the design process has been jet off on a computer-based Volumetric Study Model. This study demonstrates the enormity of the named project proportionately to its huge program. The project is deduced to be five-floored of 26 m height. The average height of each floor is around 4.6m taking no account of lighting and natural ventilation. Consequently, the study has been functionally adjusted for the mosque courtyard shall not be more elevated than the other respective components. Furthermore, the ceiling must be employed for natural lighting and ventilation services. Additionally, the study proposes allocating the medical services 36m high buildings in the backyard of the mosque for a better mental visualization. Last but not least, the study ranks the land purchase priority regarding functionality and funding for future extensions. In that event, the association would confine the land purchase process to the advantage of the project rather than hindering it.

Prayer Hall (tranquility versus radiance ): The idea of lifting the prayer hall to the level of the first floor is to achieve privacy and isolation , and provide the required serenity. Employing the narrow openings in the outer walls of the hall, closing the walls overlooking the neighbors, and directing the building to the sky are to provide lighting and natural ventilation.

The ceiling of the prayer hall consists of a huge dome and a group of semi-domes covered with translucent polycarbonate slabs that spread the refracted light beams inside. These domes erect eight palm-inspired columns from foot to spine.

The trunk is ornamented with sections of upward diagonal strips. These columns embrace the domes in a series of necklace-interspersed forms with the upper lighting that gives comfort and tranquility, giving the mosque a sense of being in a desolate paradise away from the hustling world outside. It is an abstract simulation of the palm trunk and its leaf, to revive the ambiance of the place.

Hence, the design of the mosque is oriented from the internal to the external components, whereas, it should not clone that of a former era. The building should highlight its functional , physical and social ends. It should represent the contemporary age rather than an obsolete reign, to meet its beneficiaries’ expectations; social communication which is expected to start by holy Ramadan / May 2017.

The designer adopted an internal to external order on a flexible engineering tool. The engineering system is inspired by the essence of arts and architecture in Islam. This system is known as the Golden Ratio in the Islamic Arts and Architecture, which is derived from the geometric sequence of the square roots of numbers (1: 3), which is not the standard gold ratio obtained from Greek architecture. (1: 1.6).

This ratio has been infringed by a wide mass of contemporary architects in our Islamic world, and restricted it to mere ornamental units in the decorations of Islamic arts. This ratio has high engineering flexibility and compatibility with the engineering system of the solar system . In addition to being the grounds of several of these geometric forms . The ratio of golden known from the architecture of Greek engineering is a special case of that ratio.