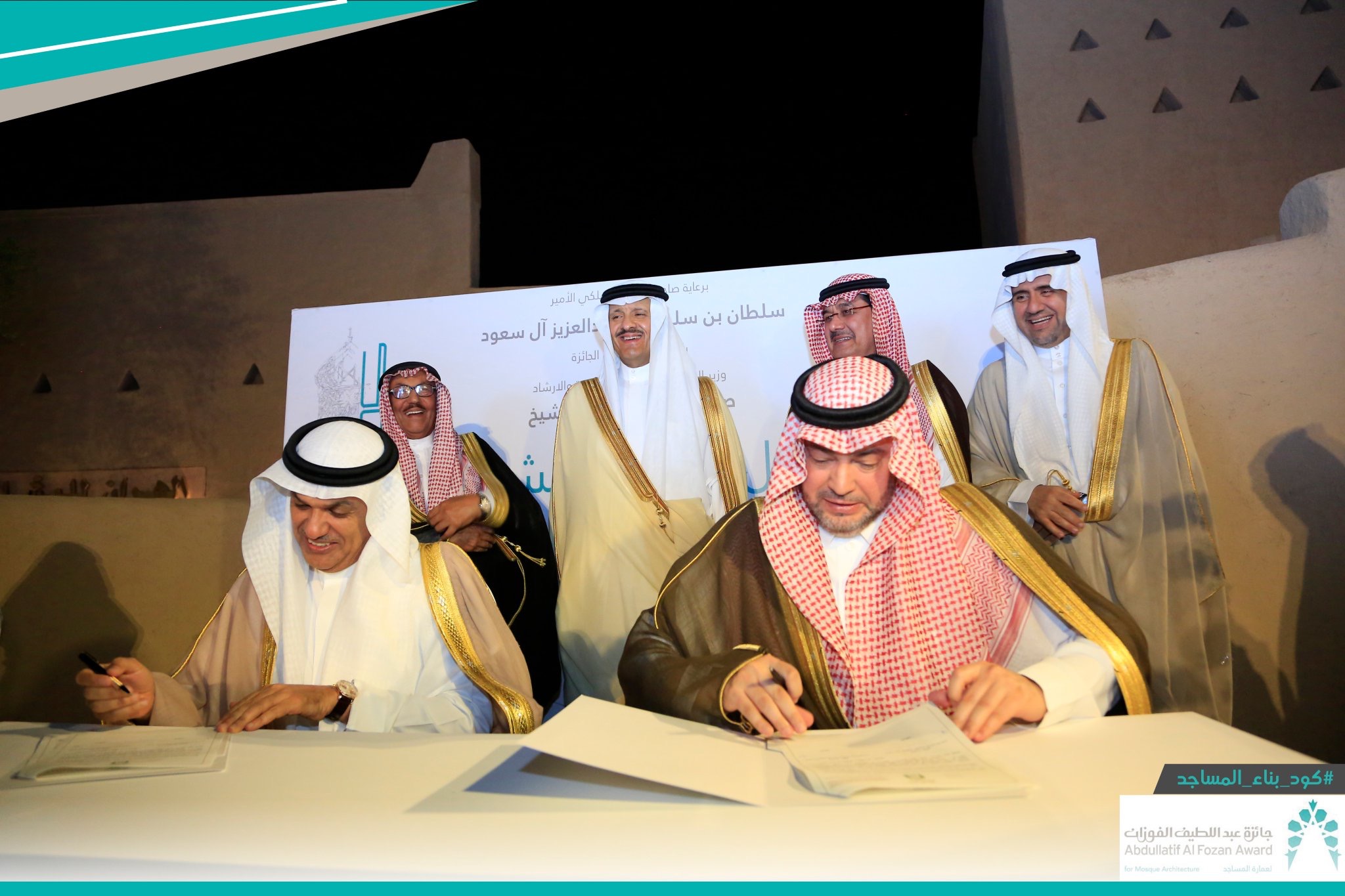 The Ministry of Islamic Affairs, Dawah and Guidance signed on Monday (May 21st) a cooperation agreement with Al Fozan Award for Mosque Architecture to adopt the code of mosques under the patronage of Head of Award Trustees, Prince of Sultan bin Salman bin Abdulaziz. In the presence of the Governor of Al-Deraiyah Prince Ahmed bin Abdullah bin Abdul Rahman and Deputy Minister of Islamic Affairs Dr. Tawfiq Al-Sudairy, Founder of the Award Sheikh Abdul Latif Al- Fozan and Chairman of the Executive Committee Mr. Abdullah Al- Fozan.

The ceremony was attended by dignitaries, Excellencies, representatives of the Award and the interested parties.

In a speech delivered by the Secretary-General of the Award, Dr. Mashary Al-Naim said that this code will be an extension of the Saudi Building Code and part of its organizational and legislative components. It will take a detailed look at the design and planning considerations that link the mosque to the surrounding area. This project, God willing, will turn into an organizational and knowledge aspect that contributes to changing the architectural reality of the mosques in our country. Al-Naim added that there are more than 100,000 mosques spread throughout the Kingdom, which required us to start in the project of mosque code to transform it to the future mosque.

His Excellency Deputy Minister of Islamic Affairs, Dawah and Guidance Dr. Tawfiq Al-Sudairy said that Mosques Building Code aims at socially sustainable mosques through presenting the mosques as a gathering of the population. The Future Mosque shall be effective and economically efficient in terms of operation and maintenance. The code will provide a set of requirements and regulations to ensure the minimum quality of the mosque geometrically, socially and economically.

For his part, Chairman of the Board of Trustees of Al- Fozan Award for Mosque Architecture, Chairman of Saudi Commission for Tourism & National Heritage, Prince Sultan bin Salman said we wished to approve this code 20 years ago because tens of thousands of mosques in which prayer are held at suffer from waste in water, maintenance and costs. These mosques suffer from damage. This code will restore life to the mosque through the participation of people, families and children to take care of their mosques under the slogan of the mosque is more important than my house. It is not reasonable to have a clean house and the mosque is not clean. It is not possible to sleep in your house and the mosque next to you suffers from problems.

The purpose of this code is to correct the current practices in mosque architecture at the planning, architectural and technical levels. It seeks to transform the mosque into an aesthetically and functionally appropriate building so that it will not be an economic burden. The code will encourage innovation and scientific research and create new specifications in adopting the flexible beauty, which takes into account the population fabric, public facilities and achieves sustainability. The code will be binding in the municipalities and the branches of the Ministry of Islamic Affairs. The engineering offices will abide by this. The timetable for the code preparation takes approximately 15 months.