Of Mosques and Light

Whenever I enter the mosque, I can’t help but let my mind wander away as it analyzes the space and the potential it has to evoke a greater sense of faith—something that seems to be architecturally lost in this day and age.

When it comes to the many sources of inspiration I have for religious architecture, I often look back deep in my memories to the gothic churches I visited during my studies abroad, and when I do, the idea of faith and light come to mind. Light and faith come hand-in-hand, as light can be seen as a symbol of hope or peace, and when I mean light, I mean natural light. Where there is light, there must be darkness, for this darkness helps frame the light and pronounce its atmospheric potential.

Many of the mosques I visited have always been designed quite simply, but natural light is rarely a concern. Instead, these mosques are illuminated with artificial lighting, even when it is bright outside. In doing so, darkness is completely eliminated and lighting becomes even, but at the cost of the power natural light can have in this religious space. This weakens the building’s ability to feel like a religious space, instead it feels more like an office— an impersonal space devoid of emotion that solely focuses on efficiency and its cost. 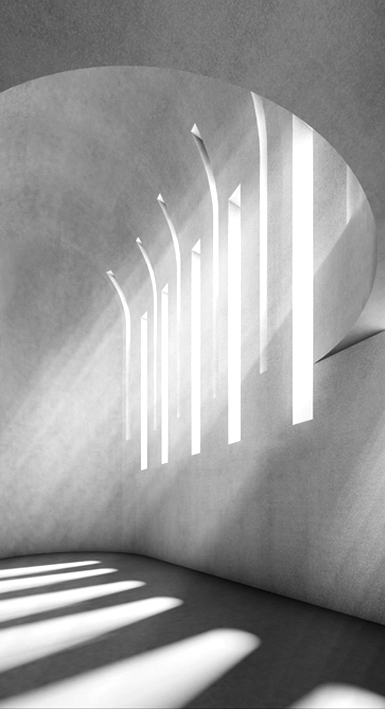 For some mosques, the solution to this problem is quite simple: turn off the lights when it is bright. Not only, is that less costly, but atmosphere is retained. This however is only half of my thoughts. The other half usually thinks, what if mosques were [partially] built with new materials? “ Take the minaret as an example, in my local dialect, it is referred to as a Manara which when translated into English actually means a lighthouse: a tower of light by the sea to guide ships to their destination. If this meaning is taken literally, then why can’t the Manara of a mosque become a tower of light?

Today, there are new materials in the market, such as light transmitting concrete, which allows for light to shine through. Imagine if a Manara was made of that material and imagine how beautiful it would be as it gently glows in the night sky, guiding people to the mosque. Imagine how beautiful and inspiring it would feel to be in the mosque with rays of light shining in as you pray during the day. There is so much potential now more than ever to utilize and play with light, a symbol that is synonymous with faith. Our mosques can be taken to a new age of design, evoking a greater sense of faith through such simple means. All we need to do is begin to treat light as a material of its own.